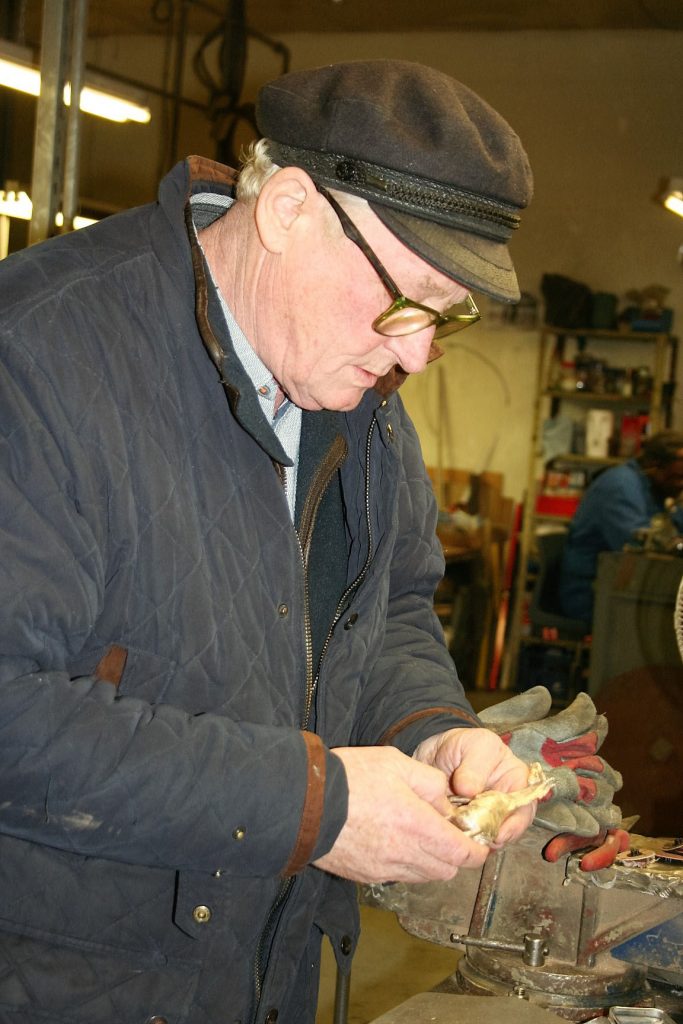 Philip Blacker was born in 1949 and was educated in Dorset. On leaving school he became a steeplechase jockey and rode professionally for 13 years, during which he rode 340 winners and competed in The Grand National nine times. Philip is among a small group of jockeys who have been in three or more top four Grand National finishes – he was fourth to Red Rum in ‘Rummy’s’ first Grand National win in 1973 and managed a seventh place in 1977 when Red Rum won his third and final Grand National.

It was during this time that Philip developed his latent enthusiasm for sculpture. Under the guidance of Margot Dent, a former pupil of John Skeaping, he devoted as much time to sculpture as he could spare from his riding, and his first three editions, all racing bronzes based on The Grand National, sold out quickly. In 1982 he retired from the saddle to concentrate full time on sculpture from his Oxfordshire studio.

Philip’s first one-man show was held at the Tryon Gallery, Cork St, London, in November 1983, and was hugely successful. Initially his work concentrated on capturing the authenticity and movement of horse racing subjects. Since his retirement from the saddle he has moved on to include a wider subject matter and to experiment with technique.

However, his ambition was to work on a grand scale and the opportunity came when he was commissioned to create a life-size sculpture of Red Rum for Aintree Racecourse. Since the success of the Red Rum bronze, he has completed 26 further life-size or larger bronzes of horses, which now stand in Canada, Australia, France, Ireland, Barbados, Japan and the UK. In recent years, his life-size commissions have included sculptures of the triple Cheltenham Gold Cup winner, Best Mate, Persian Punch for Newmarket Racecourse, a dressage horse for the New Equestrian Centre in Penang, Malaysia, and an 18 foot high sculpture of a stallion for Saudi Arabia.

Philip’s large-scale non-equestrian subjects include a sculpture for Blythe shopping centre of a local legend, strong man Willie Carr. In addition to this he completed a 1.25 size bronze of the featherweight boxer Jim Driscoll for the Cardiff Bay Development Corporation in 1998.

Since that first exhibition, Philip has held five more one-man shows. In each he has demonstrated his increasing versatility, creating sculptures of the human form and animals, both wild and domestic. In all of these, his sculptures capture the essence of expression and suspended motion.

Encouraged by Aintree Racecourse and to mark the 40th anniversary of Red Rum’s third and final Grand National win, Philip has recreated a Limited Edition of 400 statuettes of the original Red Rum bronze, each standing on a marble base and signed in the bronze plinth by the artist. The iconic original, which captures a moment during Red Rum’s morning exercise on Southport beach, is faithfully reproduced and Philip is delighted with the result.

Since the success of Philip’s life-size bronze of Red Rum, his work can be seen around the world – from Australia to Canada, Japan, the West Indies and Europe. Other large-scale size commissions include sculptures of the triple Cheltenham Gold Cup winner, Best Mate, Persian Punch for Newmarket Racecourse, a dressage horse for the New Equestrian Centre in Penang, Malaysia, and an 18 foot high sculpture of a stallion for Saudi Arabia. Philip’s private commissions include other household names – Bosra Sham, Danehill, Istabraq and Sariska and is always looking to undertake new commissions.

His large-scale non-equestrian subjects include a sculpture for Blythe Shopping Centre of a local legend, strong man Willie Carr and a 1.25 size bronze of featherweight boxer, Jim Driscoll, for the Cardiff Bay Development Corporation.

1999 Danehill for Coolmore Stud in Australia and Ireland..

2014 The Fugue for Lady Lloyd Webber